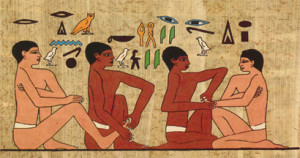 Massage Therapy is one of the oldest forms of medical care dating back to ancient and medieval times. Archaeological evidence of massage has been found in many ancient civilizations including China, India, Japan, Korea, Egypt, Rome, Greece, and Mesopotamia. BC 2330: The Tomb of Akmanthor also known as “The Tomb of the Physician” in Saqqara, Egypt depicts two men having work done on their feet and hands, presumably massage.

Massage is one of the original forms of primary medicine being that it is a common instinctual behavior for us to massage/rub an injury on ourselves or to love ones.

At Renew Wellness we offer a wide range of styles and modalities including traditional, modern and the integration of both.

All around the world modernism is making an impact not only on our cultures but also on our bodies. This is why even in my Thai massage courses we adapt the modalities to treat today’s common issues arising from this increasing epidemic. Even in eastern countries where still today Buddhism is practiced you can see the same adaption to the modern worlds lifestyles.

The good news is that also over the past few decades Massage has made a huge comeback as a predominant means of treatment and maintenance in health care around the world.

Massage is transforming more and more with the new discoveries and innovations.